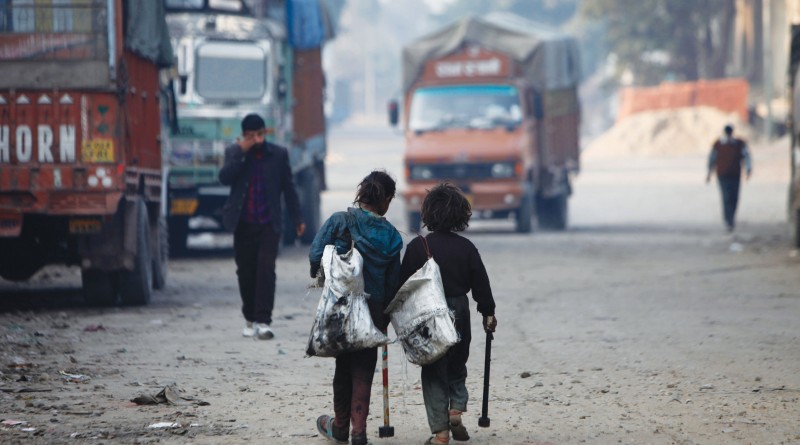 Child ragpickers are exposed to extreme occupational hazards. Immediate interventions at the level of government and society are called for to save them from a hellish, nightmarish existence
By Aayushi Jain and Kanika Joshi

Growing urbanization has led to non-biodegradable plastic and other waste piling up round the streets. With the rise of sun and churning of birds, small kids with tri-cycle and big rags in their hands are out on the streets to collect the waste, so that our city can look clean and green.
In 2001, waste picking was included among the hazardous occupations prohibited under the Child Labour Act, 1986. Still in Delhi itself, 60,000 children help in collection, segregation and recycling of waste. The nature of work involves direct contact with the toxic waste leading to many health issues. Waste picking is largely an urban informal occupational structure and consists of men, women and children.
In Delhi, waste pickers are the ones who pick waste from the streets, bins, open landfills and drains and carry it manually by cycling to collect and segregate specific items like plastic, glass bottles, etc. According to Chintan Environmental Research and Action Group, there are approximately more than 1 lakh waste pickers who help segregate the waste and recycle 30% of garbage. Waste pickers are exposed to some specific health hazards owing to their occupation. Infections and infestations result from coming into contact with garbage which contains animal and human excreta, sputum dead animals and potentially infectious hospital waste dumped in refuse dumps.
Infection of the skin, respiratory tract and gastro intestinal tract are reported to be more common among waste pickers than others form the same socio-economic group. Chemical poisoning is commonly reported due to inhaling gas/smoke of empty containers. Other than physical injuries and skin infection, the minor mental health problems can be observed in waster pickers. Mental health includes emotional, physical and social wellbeing. The nature of work, environment and community behavior toward waste pickers, affects their mental health. They are looked down upon by the society and often looked upon as criminals as their work involves roaming on the streets and colleting garbage. They stay in landfills and that in turn has major impacts on their health. 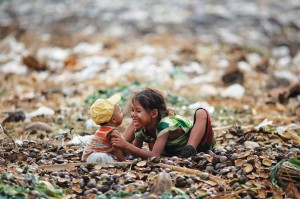 Study Area
Delhi comprise nine districts, one of them is south Delhi. The total population of south Delhi is 2733752. South Delhi ranges from congested by lanes of villages like Munirka to swanky localities like Hauz Khas, Greater Kailash, C R Park, Panchsheel Enclave, South Extension, Green Park etc. The study was conducted in three locations of South Delhi – R.K Puram, Nizamuddin and Chanakyapuri. In all the three locations, ragpickers’ colonies such as Vivekanand Camp, Hanuman Camp and Sundar Nagar were visited.

Methodology
A cross-sectional study was carried out among ragpickers and neighborhood matched referents from September to November, 2015.The target group apart from waste picker children included others from the same location that were involved in some other occupation such as office worker, carpenter, and newspaper distributer or were studying in school. Respondents only included children between the age group of 5-18 years. Primary source for data collection was twofold.

Focus group Discussion
It was carried out to gather data on occupational, socio-demographics, economic, health factors and other related details.

Self-Reporting Questionnaire (SRQ-20)
It was used to document prevalence of minor psychiatric disorders. This instrument was designed by Harding et al. for the World Health Organization (WHO) to study common mental disorders in primary health care, and it is applicable in different cultural settings, especially in developing countries.
This instrument is used to screen minor psychiatric disorders like depression and anxiety and is composed of 20 “yes/no” questions: four on physical symptoms and sixteen on psycho-emotional disturbance. An advantage of using SRQ-20 was that it has been validated in Delhi urban settings and in other studies of workers’ health, showing high sensitivity and specificity.

Result
They usually travel kilometers to collect waste from the bins, houses, and embassies. Headaches were very common among the waste picker children as they traveled the whole day in the sun, then segregated waste in evening. They have no fixed time and long duration of work also affects their appetite. 40% of waste pickers had problem of irregular diet and long gaps between the meals. 90% of children involved in waste picking had body ache and felt tired easily. The hectic schedule of waster pickers made it difficult for them to get physical as well as mental rest. Other than physical injuries which are evident, children go through mental illness which has a lifelong affect.
The problem is acute because they are not protected by occupational health and safety. According to SRQ20 score cut off, there was huge difference between ragpickers and other community kids living in the same location. Depending on the socio-cultural and occupational area, the kids who were not working as ragpickers had an average much below the actual cut-off of 9.4 set by Dr Amartya Sen. They got an opportunity to chance to complete their education and they did not have to work after school.
On the other hand, the children involved in ragpicking had higher average of 11.5, way above the cut off. They were forced to leave school sometimes due to social stigma and ended up doing this work. Even the children who were going to school had to collect waste on Sundays or help their parents in segregating waste after school. Such situation made the children feel useless in life or even at times even instigated the thought of ending their life. The children involved in this occupation come across different types of waste and even had to go in dark to collect the waste from the street resulting in anxiety and depression problems among them.
The incomplete sleep or dreadful, horrific dreams were regular to waste picker children in comparison to the other children in same location but of different occupation. There were a lot of cases where children were abused by the urban residents, and cases where they had to face problems in school due to the attitude of teachers and students not being so positive towards them. Having said all that, there is not much knowledge about mental health in India, and we should strive towards policy and implementation related suggestions for the same.
A right amount of awareness is necessary so that children as young as these do not suffer because of their fate. Every child deserves an opportunity to make something good of his/her life and to be distanced from trash.

Recommendations
Mechanisms should be in place for all recyclable material being segregated at source and collected separately. Waste collection systems including bins, boxes, vehicles as well as automated underground collection, diversion and storage systems should be promoted. Reuse of dry waste especially bottles may be done. Extracting greater value from waste by increasing resource efficiency and, increasing the export of goods and services should begin. Example: Recycling and reusing initiative by the Corporation to ensure that waste management doesn’t only end at proper segregation but also uses it as a means to re-use waste and set up waste museums, field visits, workshops and markets.
The state authorities should design an in-house specialist design advice across a range of disciplines including; architectural design, civil, process, infrastructure, landfill and geotechnical engineering. The waste pickers role should be able to assist the population by collecting all waste properly segregated in two bags/containers deposit the organic waste in collection site and sell the recyclable waste. Domestic level waste sorting is the essence of this task. Example: Green manure from wet waste is one initiative we can look at, using tetra packs to make effective dustbins for garbage disposal. Bottles can be resold after value addition using glass container. Plastic is the most collected and hence the most usable. Organizing the formal structure for the waste pickers; giving them identity so that they can also take advantage of government scheme and their children can continue going to school; organizing workshops and for vocational training and skill development of the workers in the community with a strong immersion (socially and financially) of the urban clan, are some of the measures urgently needed. We should keep having medical camps on a monthly basis especially for children, the future of the country.