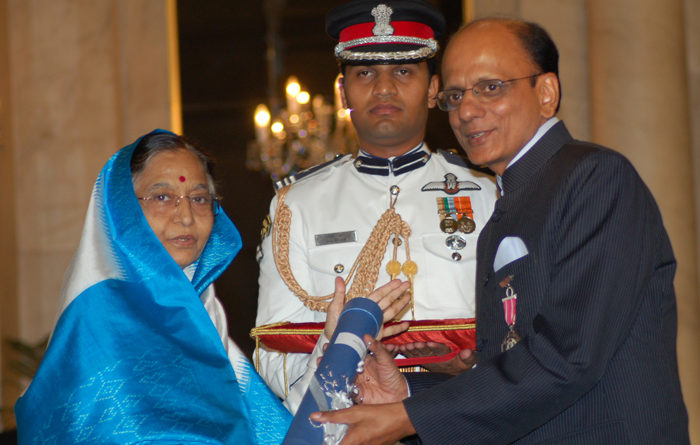 Today when materialism has crept into the medical field too, Dr K K Aggarwal stands out as a distinguished doctor with unwavering compassion and sense of service to the suffering humanity. Living up to Shakespeare’s golden words “One man in his time, plays many parts”, he is a multi-faceted healer who dons several hats in his passion to make the world a better place to live in for mankind
By Amresh Kumar Tiwary 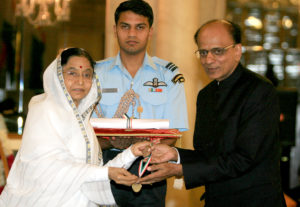 In the present era of materialism and crass commercialisation, the doctor’s profession too has taken a beating; it has been reduced to a money-minting career, instead of a service to the suffering humanity, for many practitioners of medical field. Still, there are some doctors who have not lost their healing touch, care, sensitivity, and humbleness to wipe tears of their patients. Padma Shri and Dr B C Roy National Awardee, Dr K K (Krishan Kumar) Aggarwal is an outstanding example of such worthy medical professionals who are on a mission to make a difference in the world around them by their selfless spirit to serve the mankind.
A Gold Medallist from Nagpur University and a medical communicator par excellence, Dr Aggarwal has a deep-rooted concern for the weaker sections and worked extensively in the area of life saving drug bank, pacemaker bank and free health check up camps. He runs a heart care foundation helpline and heart care foundation drug bank. His aim in life is to conceptualize cost effective health awareness modules and to propagate low cost medicare. 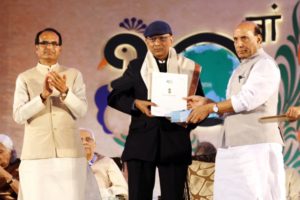 His life is an inspiration to young doctors to inherit his empathy, efficiency and humility with which he has been serving the unending stream of his patients from India and abroad. Currently, he is the National President of Indian Medical Association and also Vice President of Confederation of Medical Associations in Asia and Oceania (CMAAO).
Born on 5th September, 1958, he was the 7th child in a family of five brothers and four sisters. With such large family, his parents used to live in a one-bed room set in Hauz Qazi, Old Delhi. From 1st to 4th Class, he studied in a Muslim school and later joined ASVJ Higher Secondary School in Daryaganj where he was a very shy student, earning the soubriquet of Jhepu. He did his graduation in Zoology (Hons) from Deshbandhu College, New Delhi. Those days he had his hairs till his shoulders.
The turning point in Dr K K Aggarwal’s life came when in 1975 he joined MGIMS Medical College in Sevagram, 80 km from Nagpur. Here he topped the Nagpur university, received gold medal and was declared as the Best Graduate of the College in 1979. He did MD (Medicine) from the same college and passed out in 1983. He left lecturership in MGIMS and DM from G B Pant Hospital to join Dr K L Chopra as his junior in Moolchand Hospital. 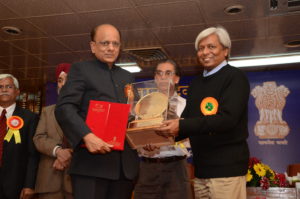 After his MD in Medicine, he joined Moolchand Hospital in 1983 and became a consultant after five months of residency by getting out of turn promotion. During his medical career, he underwent training in Immunology under Dr A N Malviya, mind body, medicine under Dr Deepak Chopra and non invasive cardiology under Dr Navin C. Nanda. Along with Dr. K L Chopra, he was the first one to start clot dissolving therapy in acute heart attack in 1984. He started Heart Care Foundation of India in 1986 of whom he is currently the President.
He brought the technology of colour doppler echocardiography in 1987 in India and In the scientific field he has many firsts to his credit. He started the clot dissolving streptokinase therapy along with Dr K L Chopra for the first time in the country in 1984. He introduced the techniques of colour doppler echocardiography and started Navin C Nanda National Institute of Echocardiography and Cardiac Research.
He conceptualized and organized the first ever “Perfect Health Mela” and “Run for your Heart” in 1991. On both these occasions, the Govt. of India released national postal commemorative stamps. The Perfect Health Mela organised at Talkatora Gardens with Delhi Administration in 1993 was declared as the best event in Asia by BBC news. Ever since, the Mela is being organised annually by him. Ministry of Family Welfare and later the Union Ministry of Health and Family Welfare, adopted this module under the National Health Policy. He also organized the first ever mega tele medicine camp and the government again released postal commemorative stamp.
Dr Aggarwal’s passion is to teach everyone how to revive after sudden death and through Sameer Malik Heart Care Foundation Fund; he supports heart surgeries to those who cannot afford it. His another passion is to co-relate Indian mythology with modern medicine. He writes extensively on cultural subjects. Out of them, Dr K K Aggarwal’s Ramayana is well known in the society.
He conceptualized the concept of health sutras which are of immense public health importance. Some of them are:-
Food of plant in origin contains no cholesterol
•Cough with fever is viral & needs no antibiotic
•Any food which is bitter & green has anti diabetic properties
•Keep your BP, fasting sugar, abdominal circumference, bad cholesterol level and heart rate all lower than 80.
•If any unusual symptoms appears for the first time or cannot be explained, do not ignore it
He has been the first one to organize conferences for the doctors and release practical guidelines for the general public during the epidemics of dengue, plague, meningococcal meningitis, leptospirosis, and epidemic dropsy. He holds the distinction of organizing eleven World Conferences on Cardiology, Medical CME Programs and health events in the country. He has been training nursing students for the last 15 years (education, interactive competitions etc). He was responsible for the training on first aid and CPR for all PCR vans in Delhi during Raja Vijay Karan’s tenure as police commissioner; training of DTC drivers on First Aid under Dept. of Transport and training of students and school principals on subjects like HIV-AIDS, road safety under the Delhi Government.
Dr Aggarwal has served the Medical Council of India as member, Medical Ethics Committee and as a council member at the Delhi Medical Council. He is very active in the Indian Medical Association and has been working tirelessly for the issues of public and medical doctors.
Dr Aggarwal is a man of many parts. Apart from being a senior cardiologist, mind body consultant and a world class clinical echocardiographer, he is also a writer, anchor, orator, columnist, health communicator, social worker/activist, educator, conceptualizer, creator, preacher, administrator, advisor, researcher and meditation teacher par excellence.
He is also Editor-in-Chief, IJCP group of publications that brings out over journals, newspapers and health care educational products catering to doctors. He is a prolific writer on community health subjects. He has contributed over 400 articles in newspapers and magazines and appeared frequently in Radio & TV talks on health. He is one of the most quoted doctors in the field of health and has been quoted over 12,000 times in the national media.
Dr Aggarwal is a multifaceted healer & a soul preacher. He promotes & integrates all systems of medicine. He established the department of Holistic Medicine at Apollo hospital in 2000; writes regularly in national newspapers and magazines
wrote regularly for the HT UK edition; produced and co-directed 52 episodes on “Body Mind and Soul” on DD News; coordinated 102 episodes of live phone-in TV programme “Healthy India” for DD Bharti with specialists on all pathies; 32 programs for Lok Sabha TV; conducts regular workshops on meditation and advocates need for introducing the subject of Spiritual Medicine in MBBS curriculum.
He conceptualized the idea of involving politicians, bureaucrats and celebrities in disseminating health messages to the community utilizing the principle ‘Hit the Iron When It is Hot’ and ‘Involving People Who Count’. He has involved famous past and present cricketers, film stars, TV stars, models, dancers; fashion designers to interact with the media on health related topics or distributing personalized health messages signed by them.
His wife Dr Veena Aggarwal is a gyneacologist with who runs medical and public communication along with son Nilesh and daughter Naina.