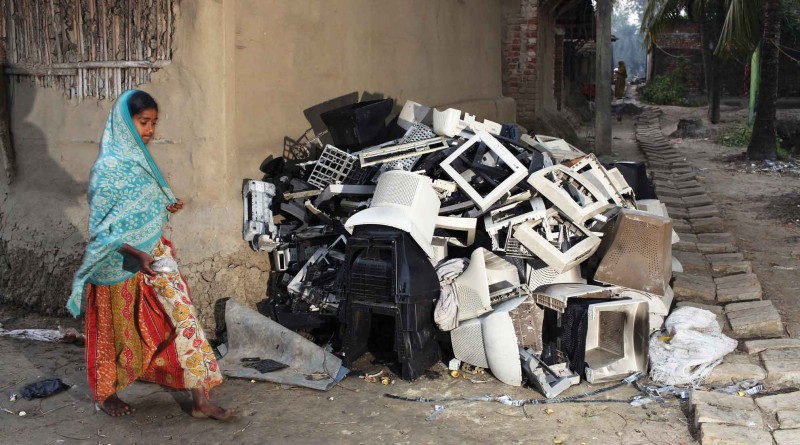 The primitive practices of burning e-wastes not only create an enormous amount of environmental pollution, but also disseminate geno-toxic agents which are found to be mutagenic or carcinogenic, i.e. Capable of causing genetic mutations or the development of cancer
By Dr Suneela Garg/ Dr C. Vankhuma

The information revolution in the wake of the outburst of information and communication has brought enormous changes in the way we conduct our lives, society and economy. These changes have brought enormous development and enhanced the quality of our lives.
The Indian information technology sector is also largely contributing to the global economy. At the same time, it is generating a new problem to our civilization as a result of its by-product known as electronic waste or e-waste. The electronics industry today is one of the world’s largest and fastest growing manufacturing industries and e-waste churned out by it is one of the rapidly growing problems of the world. The quantity of such waste has now become such a major problem that it has now become the most rapidly growing segment of the formal municipal waste stream in the world.
According to a United Nations Environment Programme (UNEP) report, the total numbers of mobile users in India stand at 1 billion as on November 2015. With ever rapid change in technology, the average lifespan of computer has dropped from 6 years in 2002 to just 2 years. Today’s mobile phones have a lifecycle of less than 2 years in developed countries. It was also stated that 674 million mobiles phones were sold worldwide in 2014 i.e. (30% more than in 2008). There are 178 million new computers users in China and 80 million new users in India.

MAGNITUDE OF THE PROBLEM
In the Global scenario, the U.S. generated the largest volume of e-waste with about 3 million tonnes in the year 2010 as per the UNEP report. Second to it is China that produced about 2.3 million tons the very same year. It has also been estimated that the EU and the U.S. together would account for maximum e-waste generation during this current decade (12-20% recycled properly). The Basel Action Network (BAN) stated in a report that 50-80% of e-waste collected by the USA is exported to India, China, Pakistan, Taiwan, and a number of African countries.
India is already facing burden with its solid waste management and disposal due to scarcity of manpower, management system and infrastructure. With the emergence of e-waste, this has become an even more complicated task to handle efficiently.
According a statement made by the Central Pollution Control Board, 1,46,000 tonnes of e-waste was generated during 2005 which rose to more than two times to about 3,80,000 tonnes during the year 2007. It is estimated to touch around 8,00,000 tonnes in 2015. By 2020, e-waste from old computers in India will jump by 500% and the amount of discarded mobile phones will be about 18 times high according to the UNEP.
A study published by the Manufacturers Association of Information Technology (MAIT) in the year 2011 states that “India produces almost 4, 00,000 tonnes of e-waste each year. Out of the country’s total e-waste only 5 percent is recycled and about 40 percent of obsolete and unused computers and electronic products decay in homes and warehouses.”

E-WASTE MANAGEMENT& INDIA
In India, e-waste management assumes greater significance not only due to the generation of its own e-waste but also from the dumping of e-waste from developed countries. There is also lack of appropriate infrastructure and procedures for its proper disposal and sound recycling. Electronic equipment contains many hazardous metallic contaminants such as lead, cadmium, and beryllium and brominated flame retardants. The fractions constitute mostly of metals- 64%, (ferrous – 38%, Non-ferrous-26%), Plastics & Ceramics – 30%, and Glass – 4% ,
The recycling process is presently concentrated in the informal (unorganized) sector where few or no organized collection system prevails. The operations conducted are mostly illegal and the processing methods are highly polluting to the environment and also pose risk to the health of the people engaged in them.
India heavily depends on the unorganized sector as only a handful of organized waste recycling facilities are available as of today. Over 95% of the e-waste is treated and processed in the majority of urban slums of the country, where untrained workers carry out the dangerous procedures without personal protective equipment and using primitive methods of disposal. Land filling which is also known as dumping site for the disposal of waste materials by burial is the oldest form of waste treatment which allows heavy metals to leak into ground water.
Metals like mercury, cadmium, lead reach into the soil and ground water becomes polluted. Another common practice of disposing e-waste is incineration which basically is a controlled and complete combustion process, in which the waste materials are burned in specially designed incinerator at a high temperature (900 – 1000c)which produces fumes that are harmful to the environment.
A less commonly practiced method of recycling and disposal of e-waste which is also prevalent in the country is Acid Bath. In this method, the items are dumped concrete tubs and then treated with lead acid. The recyclers dump all collected e-waste into the acid bath overnight and once the process is done, most of the liquid waste is dumped into the nearest sewage, drains and into rivers which causes water and soil contamination. 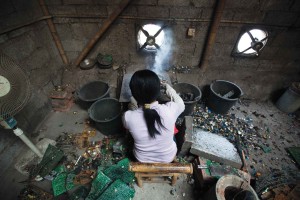 E-WASTE HARARDS AND ITS PUBLIC HEALTH CONCERN
E-waste is not hazardous waste per-se. However, the hazardous constituents present in the e-waste render it hazardous when such wastes are dismantled and processed. The ever increasing amount of e-waste associated with the lack of awareness and appropriate skill in handling them has been a challenge that poses a serious threat to our environment and health of the people.
A large number of untrained/unprotected workers are currently engaged in the system whose health is at risk. E-wastes can cause widespread environmental damage due to the use of toxic materials of its constituents. High-risk backyard operation, non- efficient and non-environmentally sound technologies are the major causes of concern. This directly or indirectly impacts the vulnerable social groups i.e. women, children and immigrant laborers. Studies in China have shown that recycling activities had contributed to the elevated blood lead levels in children living there because the processing and techniques used during the recycling activities were very primitive and also reported that the human milk, and placenta from the e-waste processing site showed significantly higher levels of harmful substances like polychlorinated dibenzopdioxins and polychlorinated dibenzofurans (PCDD/Fs) amongst the people who were residing in nearby areas of such recycling sites.
The primitive practices of burning E-wastes not only create an enormous amount of environmental pollution, but also disseminate geno-toxic agents that threaten the health of current and future generations living in the local environment which are found to be mutagenic or carcinogenic, i.e. capable of causing genetic mutations or the development of cancer. The geno-toxins associated with e-waste include: metals such as chromium, beryllium, and cadmium; chlorinated dioxins and furans formed from the burning of plastics; and, flame retardants such as poly-brominated diphenyl ethers. These can lead to a number of pathologies including genetic disorders, infertility, spontaneous abortions, elevated cancer risk and premature ageing.
In India, the Government has also taken a number of measures to curb the problem by introducing various laws and operational guidelines like ‘The Hazardous waste (Management Handling and Trans boundary Movement) Rules, 2008’ and the ‘The E-waste (Management and Handling) Rules, 2011’. The Supreme Court has also given directives to build facilities for treatment of e-waste but only 23 are present in country out of which 75% of the state bodies are not following the directives.
However, our country has still been facing various issues and obstacles in implementing these directives and guidelines as well. According to an e-waste management study in India on “Role of state agencies” , most of the Indian states have failed to implement e-waste rules in the country which came into being in 2011. The study also reveals that lack of efforts and action is made by most state pollution control board and committees which is a very discouraging sign.
Therefore, there is an urgent need to plan appropriate strategy in relation to the health hazards of e-waste handling and proper information and assistance should be provided to those people regarding safe handling of such waste along with proper personal protection. It needs to be adopted in the management system in accordance with prerequisite conditions such as proper legislation, collection system, logistics, and manpower. Further, this may also require more rigorous research and evaluation studies in this field.

Need and scope of Decade of healthy Ageing

Compassionate Drugs: A reason for hope and smile