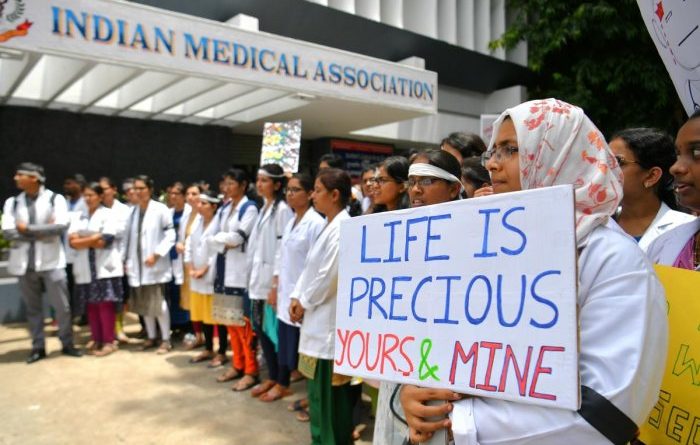 “East is East, and West is West, and never the twain shall meet.” Indian Healthcare authorities appear to be hell bent on proving this wrong. India is the birthplace of Ayurveda. Unani system also has flourished here when the Persians brought it. Homeopathy was also started in India……
By Dr Vinay Aggarwal

In late 1800s Modern Medicine (Allopathy) was introduced in India by Britishers in big way. Medical colleges were established in Calcutta, Madras and Bombay. Modern medicine rapidly gained acceptance and by the time of Independence it had become the frontrunner amongst all Medical systems.

Independent India adopted the 3 tier approach of Health delivery, viz. Primary, Secondary and Tertiary care. All of this involved Modern Medicine (Allopathy) system with the other systems remaining out of the loop. Despite very low budgetary allocations for health sector the results have been spectacular. India’s “Average life expectancy” has gone up from 35.21 years in 1950 to 69.73 years in 2020.

Private sector has played a big role in past about 40 years in delivering quality health in India. We are respected throughout the world for our Clinical acumen and world class services, which we provide at a fraction of the cost compared to the western nations. Medical tourism is a big foreign currency earner in India.

However the present Healthcare regulators appear to destroy all of this. The process of decimation of Modern Medicine started with the introduction of National Medical Commission (NMC) to replace Medical Council of India (MCI). The ruse was corruption in MCI. It was only an excuse. Is there any other department in the country where it has been replaced because of “corruption”? The real reason was the strict control of MCI on Medical education and practice.

The politicians (many of who own Medical or allied colleges) had tried to introduce Bachelor of Rural Medicine course to circumvent the stringent norms required to impart MBBS degrees. MCI stood its ground and the BRMS course was scrapped despite Central government backing. NMC is a body full of government or government backed representatives. This body has been created to be a “Yes Man” to the policies rather than being a watchdog which independently elected Doctor’s body called MCI was.

Next step was the announcement of new Education policy by the government. This policy made it clear that government wants to do away with different systems of medical practice by 2030. Its “inclusive system” would lead to “Khichdi” Doctors being produced, who won’t know which system to follow and when. This is the future of medical practice which awaits India.

In order to test waters about acceptability of Mixopathy the government has now brought out a gazette notification allowing Ayurveda Graduates to perform surgeries. They would also be allowed to write their degrees as “MS (General Surgery)” so that there is no difference between them and Modern Medicine surgeons in public’s eyes.

The gazette notification allowing Ayurveda Graduates to perform surgeries and the write MS (General Surgery) as their degree would corrode the confidence of the public in the surgical fields. Surgery has been one of the 8 branches of Ayurveda and so there can be no objection to Ayurvedic graduates practicing Ayurvedic surgery. The problem arises when these Ayurvedic vaids would be performing “Allopathic surgeries” for example a Cesarean section delivery. There is no mention of Cesarean delivery in any Ayurvedic text, nor has any Ayurvedic Shalyachikitsak ever developed and published a technique of performing it.

Modern Medicine has developed anaesthesia which ensures painless surgery, but Ayurveda has no such system. So they would have to use Modern Medicine anaesthesia. How would the drugs used in anaesthesia react with Ayurvedic drugs? There is no research on it. Similarly, Ayurveda has no concept of Bacteria or Fungi causing infections. How would they control the post surgery infections? If they use Modern antibiotics then do they have the knowledge about them? And again, there is no research on how these antibiotics would interact with Ayurvedic drugs.

There can be no objection to Ayurvedic practitioners performing the surgeries described in their texts, using their anaesthetic mechanisms and their drugs to heal the wounds.

Indian Medical Association (IMA), which is the apex body representing all Modern Medicine Doctors, has condemned this in a strongly worded press release titled, “Poaching Modern Medicine is not the answer.” IMA has asked government to take back this notification and work for development of Ayurveda instead.

MP Jairam Ramesh, who is a member of Standing committee of Health of the Parliament, has also tweeted that “Allopathy is Allopathy, Ayurveda is Ayurveda.”, making it clear that the two are totally different. He has also stated that the government tried to mix both last year also, but the Parliament nixed it. Then why is the government still going ahead with it?

“Everybody Cannot Be Allowed To Treat”, this is what Supreme Court said on AYUSH Practitioners Prescribing COVID Medicines. If Ayurvedic practitioners cannot even prescribe medicines (from government’s approved list) then how can they be allowed to perform surgeries about which they have no knowledge?

Pune High Court’s judgment in September, 2020 has convicted two Ayurvedic practitioners, for performing Cesarean section by 10 years imprisonment. The deliberations of the court are very important with respect to the government’s recent notification:- “Both doctors have degrees in Ayurvedic Medicine. While Shimpi has a BAMS degree, Deshpande has a BAMS degree with a MS in Ayurveda Shalyatantra. While charging the duo for culpable homicide, the prosecution also argued that the two doctors did not have the requisite education and training to perform these procedures.”

If the deceased patient would have known that the Gynecologist is actually BAMS and not MBBS, probably she would have taken better decision. There can be no objection to their degree being called “Sanatakuttar Shalyachikitsa Vaid”. Why are we demeaning our tradition by using “Doctor” instead of “Vaid”? Are we trying to suggest that “Doctor” is more respectable than “Vaid”?

With so many problems, why is the government allowing this “Mixopathy” (mixing of different pathies of medical treatment)? The reason appears to be commercial. There are Private Ayurvedic colleges which have few students if any. The Ayurvedic Medicine practice has gone out of fashion. Patients don’t prefer it. Most of the Ayurvedic and other Ayush practioners use “Allopathic” medicines to treat their patients despite it being banned (and they having little knowledge of it). Instead of increasing the number of Medical colleges, increasing Post graduate seats in existing medical colleges, spending much more on government sector healthcare delivery, the government is resorting to such shortcuts. Its like allowing Taxi drivers to fly aeroplanes, just because there is a shortage of pilots.

Hopefully general public would understand the perils of such “One nation, one medical system” and reject “Mixopathy”. The government should listen to the demand of Modern Medicine Doctors and repeal the recent notifications, otherwise the consequences for future of Indian Healthcare would be grim.

(The author is Past National President, Indian Medical Association and recipient of Dr BC Roy National Award)