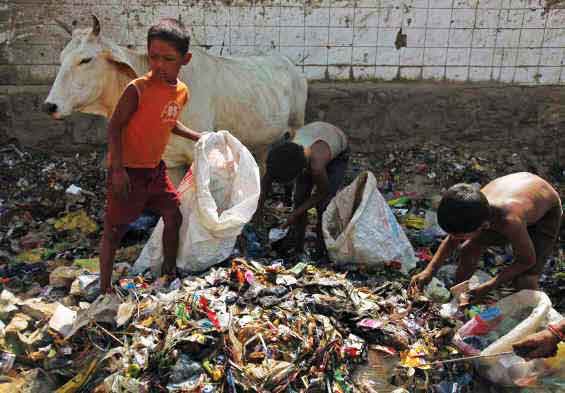 The pain of millions of anonymous rag pickers who keep our city clean by picking our daily garbagesimply goes unrecognized. So, it’s time now to make conscientious efforts for their overall welfare and improvement
By Kanika Joshi

A study was recently conducted in the three locations of South Delhi region of the capital city of New Delhi on waste pickers’ mental and physical health.It has been found that children who work as waste pickers are more likely to fall mentally ill.
The total population of Delhi as per the provisional figures is 16,753,235 comprising 8,976,410 males and 7,776,825 females (Census 2011). Delhi comprises nine districts;one of them is south Delhi. The total population of south Delhi is 2,733,752.South Delhi is a blend of both ancient and New Delhi.
South Delhi region ranges from congested by-lanes of villages like Munirka to swanky localities like Hauz Khas, Vasant Vihar, Greater Kailash, C. R. Park, Panchsheel Enclave, South Extension, Defence Colony, Friends Colony, Green Park, etc. Delhi made its inroads by expanding to every potential location within the periphery of Delhi and South Delhi is the outcome of this very fact.

Overview
Waste picking is largely an urban, informal occupational structure which consists of men, women and children. Poorest of the poor, illiterate and unskilled migrants, who are usually socially excluded due to the low caste hierarchy, are involved in this sector. Accounting of this sector’s networks and total number of employees are not available because of it not only forming a part of the informal sector, but a large percentage of this sector’s employees are migrants.
In Delhi, there are approximately more than one lakh waste pickers who help segregate the waste and keep our city clean by recycling 30% of garbage(Chintan Environmental Research and Action Group, 2015).In Delhi, waste pickers are the ones who pick wastes from the streets, bins, open landfills and drains and carry this waste either manually or on cycle to collect and segregate specific items like plastic, glass bottles, etc. The fact that they belong to the most deprived sections of the urban population, they suffer from such conditions as under-nutrition, growth retardation, anemia, tuberculosis and other bacterial and parasitic diseases, to name a few.
According to a study conducted by the National Labour Institute, waste picking is the fourth largest occupation of the street children in Delhi. There are 60,000 children in Delhi alone who help in cleaning, segregating and selling recyclable waste. In 2001, waste picking was included among the hazardous occupations prohibited under the Child Labour Act, 1986. The nature of work involves direct contact with the toxic waste leading to many health issues and some of them get addicted to glue and other drugs.
In India, there is no national database providing comprehensive information on the magnitude and the nature of these adverse health and environmental consequences associated with poor solid waste management.
The largest category for urban employment is non-trader service, including the occupation of waste picking which makes a substantial contribution to solid waste management and environmental sustainability. Data on waste pickers comes from The Alliance of India waste pickers, which defines waste pickers as ‘self-employed workers in the informal economy who earn their livelihood from the collection and sale of recyclable scrap from urban solid waste for recycling.
They collect discarded materials that have zero value and convert them into tradable commodities through their labour in extracting and collection, sorting, grading and transporting’. It saves nearly a million tons of Carbon Dioxide equivalents in Delhi and manages 59% of the waste in certain pockets. In India, there are at least 15 lakh waste pickers and buyers who are informally employed. Health hazards in waste pickers stem from two aspects, viz. poverty and their occupation.

Health Risks
The problem is acute because waste pickers are not protected by occupational health and safety. The most common health impairments found in this community are injuries due to cuts and bruises, from medical waste/chemical waste and those caused by animals. The hazardous working conditions lead to bruises from sharp glass or broken bottle.
Similarly, 27% of the waste pickers who collect medical waste sustain injuries from syringes, sharps and broken bottles and there is a high occurrence of the waste pickers being bitten by rodents, snakes, dog’s bites and stings as well. There are various airborne diseases common to waste pickers due to exposure to dust in landfills, exposure to toxic waste, waste reactions and open dumping grounds. It causes infections, allergies, respiratory diseases and chemical poisoning. Other diseases like tuberculosis, scabies, asthma, ulcers and stomach problems are also commonly reported.
Infections and Infestations spread from coming into contact with garbage which contains animal and human excreta, sputum dead animals and potentially infectious hospital waste dumped in refuse dumps. Infection of the skin, respiratory tract and gastro intestinal tract are reported to be more common among waste pickers than others from the same socio-economic group.
Chemical poisoning, including pesticide poisoning because of coming into contact with empty containers of chemicals or using these as containers for food or water, or burning such containers as a source of warmth in winter have been reported. Several anecdotal pesticide poisoning cases have been documented in children who have used discarded pesticide tins as a glass for drinking water; lead poisoning in families where discarded lead acid battery containers were used as fuel have been documented.
Dog bites as well as stings of snakes and other vermin, insects are common. Besides, injuries, cuts and bruises on hands and feet by sharp objects in the refuse occur quite frequently. If these injuries are not treated, they can lead to non-healing ulcers. Of all these problems, the infections and infestation are probably the most important and widely prevalent health problems.

Measures
Despite this acknowledgment by the government, the situation continues to be the way it is. The most important solution to the problem of health hazards of waste pickers is to ensure that all recyclable material is segregated at source and collected separately. The waste pickers can assist the population by collecting all waste properly segregated into two bags/containers, deposit the organic waste in collection site and sell the recyclable waste.
Attempts can also be made to ensure that these children wear some affordable protective gear such as plastic gloves and covered foot wears. Improved waste collection and disposal practices in areas will substantially reduce health hazards caused to waste pickers.