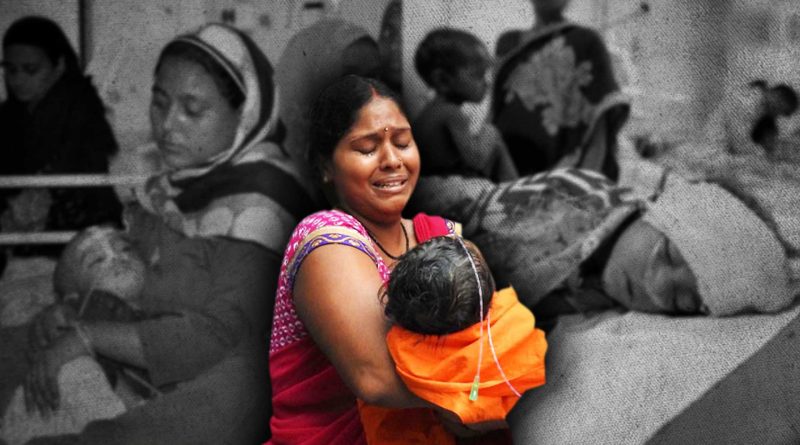 The deaths of 170 children due to AES or brain fever in Bihar exposes flaws in the proper implementation of vaccination, provision of safe drinking water, cleanliness, hygiene and basic health and nutrition programmes in the state….
By Abhigyan / Abhinav 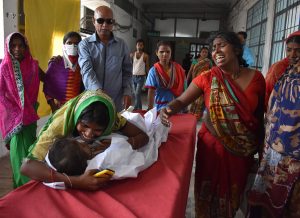 Acute Encephalitis Syndrome (AES) or ‘brain fever’ has afflicted more than 600 children across 16 districts of Bihar of which more than 170 have lost their lives since the beginning of this month.
The worst-hit district is Muzaffarpur where hundreds of children have lost their lives and others are admitted to hospitals mostly at Muzaffarpur’s state-run Sri Krishna Medical College and Hospital (SKMCH) and privately-owned Kejriwal hospital for treatment of AES which is characterized by sudden onset of high fever and convulsions.
Between 2008 and 2014, there have been 44,000 cases and nearly 6,000 deaths from encephalitis throughout the country. Most of the deaths were reported from Uttar Pradesh and Bihar. 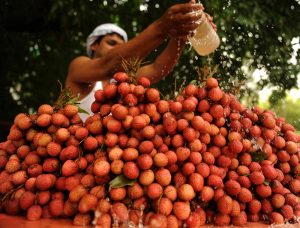 In 2016, around 125 children died in Gorakhpur. The high number of deaths this year has been blamed on hypoglycemia or sudden drop in blood sugar levels, which some experts attribute to malnutrition and consumption of unripe litchi, a fruit grown in abundance in north Bihar on an empty stomach and failure to administer glucose within four hours of the onset of fever and other symptoms. But later on IMA expert team denied that over consumption of unripe litchi was cause of the AES Unfortunately, the state government was found wanting in taking timely and adequate steps to control the epidemic. 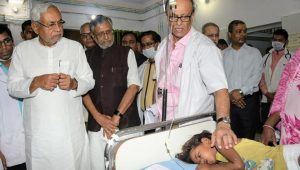 Union Minister of State for Home Nityanand Rai, who also heads the state BJP unit, has resolved to do his bit and all BJP Lok Sabha members in the state shall be donating Rs 25 lakh to the Sadar hospitals in their respective constituencies for setting up of a Pediatric Intensive Care Unit (PICU). Rai has decided to contribute Rs 25 lakh from his MPLAD fund for PICU. Deputy Chief Minister Sushil Kumar Modi, at a pre-budget meeting of Union Finance Minister Nirmala Sitharaman with finance ministers of states, raised the issue of AES outbreak and sought a grant of Rs 100 crore for setting up a 100-bed paediatric ICU, a research centre and building a new AIIMS besides upgrading the state’s medical colleges to a level comparable with the AIIMS. 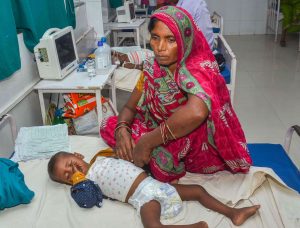 In view of the situation arising due to the AES cases in Muzaffarpur and other adjoining districts in Bihar, Dr. Harsh Vardhan, Union Minister of Health and Family Welfare has instructed for deployment of eight advanced life support ambulances (ALS) in the affected districts. Accordingly, eight ALS have been pressed into service for transportation of critical patients under National Health Mission (NHM). The central teams of pediatricians and para-medics have been deployed in the field and have started working in coordination with the state government. Dr. Harsh Vardhan further added that sixteen senior district officials and medical personnel have been sent to the vulnerable blocks for monitoring and early identification of cases and ensuring daily reporting. Their headquarters have also been shifted to these blocks also, he added 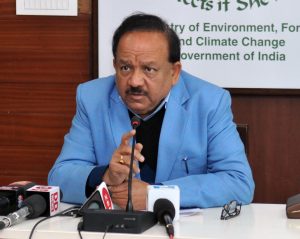 Dr. Harsh Vardhan said that the District Collector has deputed Senior Deputy Collectors (SDC)/District level officers to lead various block teams. These teams will be assisted by a district level Medical Officer and Medical Officer in charge (MOIC) to do the overall work at block level. He further said that the State has been given instructions to switch to daily surveillance and monitoring for detecting early warning signs of the disease. “The State government has started a social audit along with active case finding campaign through house to house survey and moving the prospective patients to the nearest PHC for early intervention. Surprise checks are also being conducted at the PHCs by SDCs. Additionally, the early morning inspection of Anganwadi Centres is also being undertaken by SDCs and Child development Project Officers (CDPOs). They are also distributing ORS to each house in the affected villages,” he stated. The ANMs and ASHAs have been directed to visit every house for raising awareness about AES/JE by distributing pamphlets and brochures. Awareness is also being created through other measures such as miking and inter-personal communication.
Also, an ICMR team of experts has been deployed at the SKMCH hospital for making the virology lab operational at the earliest. The Union Health Minister further stated that the multi-disciplinary team deployed earlier is reviewing all the case records of AES patients, admitted and treated in 2019. “The team is reviewing the case records of discharged and deceased AES patients at SKMCH using a standardized tool to know the reasons for mortality. We expect to complete the activity in next two to three days. A similar exercise will be undertaken in the Kejriwal Hospital,” Dr Harsh Vardhan said. 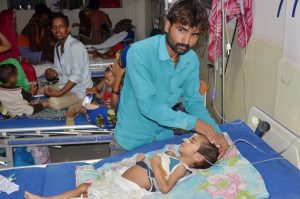 The multi-disciplinary team will systematically collect clinical, nutritional and epidemiological information from AES patients hospitalized since 18 May 2019. Blood, urine and CSF samples will be collected from these patients to rule out infectious aetiology. The team will also conduct case-control study (by taking household/village controls) to reconfirm the role of missing meals and litchi consumption (including the quantity). Orientation training of all pediatricians of SKMCH will also be conducted in batches over the next few days on clinical case management and treatment protocol of AES and brief the new team about case assessment, investigations and treatment protocols already in place and request them to continue the same.
What is Acute Encephalitis Syndrome (AES?)
AES is a group of clinically similar neurologic manifestation caused by several different viruses, bacteria, fungus, parasites, spirochetes, chemical/ toxins etc. The outbreak of (AES) usually coincides with the monsoon and post-monsoon period when the density of mosquitoes increases while encephalitis due to other viruses especially entero-viruses occurs throughout the year as it is a water borne disease. 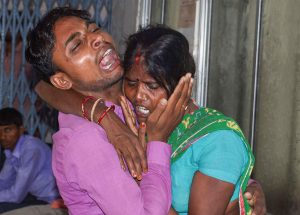 It predominantly affects population below 15 years. There is seasonal and geographical variation in the causative organism. It has its endemic zones running along the Gangetic plain including states of eastern UP, Bihar, West Bengal and Assam, and parts of Tamil Nadu. The epidemiological analysis of the data collected for the States from 2008-2013 revealed the most vulnerable age group to be between 1-5 years followed by 5-10 years and 10-15 years in that order. All the endemic States except Assam start reporting the decease cases from July onwards attaining a peak in September-October. In Assam the cases start appearing from February and attain a peak in the month of July. Due to circulation of entero-viruses particularly in Eastern UP AES cases are reported round the year.
In India, AES outbreaks in north and eastern India have been linked to children eating unripe litchi fruit on empty stomachs. Unripe fruit contain the toxins hypoglycin A and methylenecyclopropylglycine (MCPG), which cause vomiting if ingested in large quantities. Hypoglycin A is a naturally occurring amino acid found in the unripened litchi that causes severe vomiting (Jamaican vomiting sickness), while MCPG is a poisonous compound found in litchi seeds that causes a sudden drop in blood sugar, vomiting, altered mental states leading to lethargy, unconsciousness, coma and death. These toxins cause sudden high fever and seizures serious enough to require hospitalisation in young, severely malnourished children.

Signs and Symptoms
AES is characterized by an acute onset of fever and clinical neurological manifestation that includes mental confusion, disorientation, delirium, or coma. Apart from viral encephalitis, severe form of leptospirosis and toxoplasmosis can cause AES. Keeping in mind the wide range of causal agents and the rapid rate of neurological impairment due to pathogenesis, clinicians face the challenge of a small window period between diagnosis and treatment. 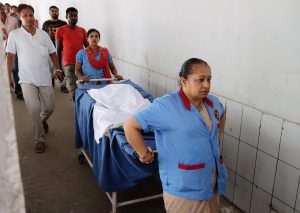 Vector control
• The preventive measures are directed at reducing the vector (mosquito) density.
• JE vectors are exophillic and endophagic in nature. The risk of transmission increases when the human dwellings and animal sheds particularly piggeries are situated very close to each other. Piggeries may be kept away (4-5 kms) from human dwellings. When they are situated far from each other, the risk of transmission is reduced.
• Personal protection against mosquito bites can be ensured by using insecticide treated mosquito nets.
• Clothing reduces the risk of mosquito bite if the cloth is sufficiently thick or loosely fitting. Long sleeves and trousers with stockings may protect the arms and legs, the preferred sites for mosquito bites. School children should adhere to these practices whenever possible.
• Household insecticidal products, namely mosquito coils, pyrethrum space spray and aerosols have been used extensively for personal protection against mosquitoes. Electric vaporizer mats and liquid vaporizers are more recent additions which are marketed in practically all urban areas.
• Repellents are a common means of personal protection against mosquitoes and other biting insects. These are broadly classified into two categories, natural repellents and chemical repellents. Essential oils from plant extracts are the main natural repellent ingredients, i.e. citronella oil, lemongrass oil and neem oil.
• The reduction in mosquito breeding requires eco-management, as the role of insecticides is limited.

Vaccination
As per Govt. of India guidelines, 2 doses of JE vaccine have been approved to be included in UIP to be given one along with measles at the age of 9 months and the second with DPT booster at the age of 16-24 months w.e.f. April, 2013.
Several government initiatives have been undertaken to educate and improve the hygiene of people living in the JE endemic zones. Government and non-government organizations have been instrumental in providing proper nutrition to the AES-affected population as most of the affected people belong to the lower economic strata of the society.
The Govt. of India, as part of the National Programme for Prevention & Control of AES, follows a multi pronged strategy encompassing preventive measures (sanitation, safe drinking water, improvement in nutrition etc.), case management (capacity building of medical and para-medical staff, referral etc.) and rehabilitation (physical and social rehabilitation of disabled children), measures to address the problems relating to AES.