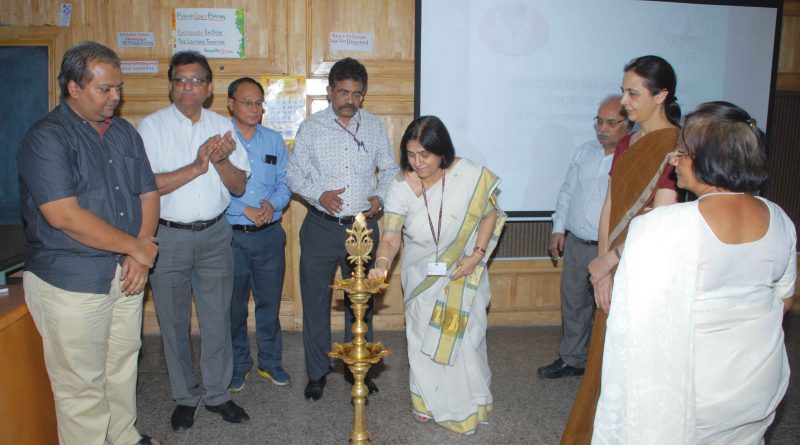 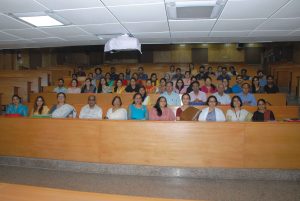 The list of invitees included representatives from Director General of Health Services, Directorate of Health Services, Govt. of NCT Delhi, Maternal Health, MoHFW, GoI, ICMR, Maternal Health Division, NHSRC, WHO, Population Council of India, Dept. of Obstetrics & Gynaecology.
A total of 70 participants attended the workshop. The workshop began with introductory remarks by Dr. Neha Dahiya, Senior Resident, Dept. of Community Medicine, Maulana Azad Medical College, followed by lamp lighting by the respected dignitaries.
After the lamp lighting ceremony, the welcome address was made by Dr. Suneela Garg, Director Professor & Head, Dept. of Community Medicine, Maulana Azad Medical College, and Principal Investigator of the project. In her welcoming address, Dr. Suneela Garg, spoke about domestic violence as a public health issue and about its impact on the health of pregnant women and the birth outcome. She also mentioned the need for screening of pregnant women, for any kind of domestic violence so as to provide counseling facilities to the domestic violence victims and take necessary action. She also stressed on the need for health personnel at ANC clinics to be more gender sensitive and recommended the display of IEC material on domestic violence at ANC clinics. 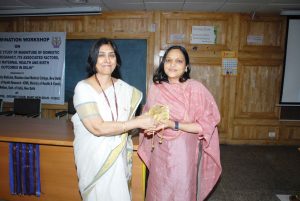 Dr. J.P. Kapoor, Director, Directorate of Family Welfare, Dr. Dinesh Baswal, Deputy Commissioner, Maternal Health, MoHFW, GoI and Dr. Apoorva Ratano, Senior technical officer, Maternal health, made the inaugural remarks.
Dr. Dinesh Baswal in his introductory remarks spoke about how the Ministry of Health and Family Welfare will take appropriate action at the national level based on the findings of this study, taking feasibility into account.
Dr. Shalini Singh, Scientist F, ICMR spoke on the need for addressing gender based violence in healthcare setting and the public health implications of gender based violence.
The next session was by Dr. Suneela Garg, on ‘Introduction to the project; objectives and methodology. In this session she defined domestic violence and discussed its various forms. Also Dr. Suneela Garg spoke about the magnitude of domestic violence amongst pregnant women globally and in Indian scenario, its effect on the health of the pregnant woman and birth outcome and risk factors for domestic violence. This was followed by a brief overview of the objectives and methodology including sample selection, study tools used, data collection and analysis of the study.
The key findings of the study were presented by Dr. M.M. Singh, Director Professor, Dept. of Community Medicine, Maulana Azad Medical College and Co-Investigator. The findings presented were the socio-demographic details of the study subjects and the spouse, magnitude of domestic violence at all 4 visits and its types and association of domestic violence with various factors such as socio-demographic details of the study subject and spouse, history of substance abuse, history of RTI/STI, maternal health conditions and birth outcomes. The predictors of domestic violence which surfaced from this study were poor socio-economic status, duration of marriage, history of past abortions, history of RTI/STI and PID, any history of mental health disorders in the spouse, criminal background of the spouse and multiparity.
The discussion that followed generated various suggestions from the dignitaries. Dr. Niranjan Saggurti, Director, Population Council of India complimented the team and suggested that the incidence of domestic violence at each visit in the study should be calculated and data should be relooked at to find association between domestic violence and risk factors by multivariate analysis. Dr. Amrita Kansal, NPO-MRH, WHO, spoke about the need for creating awareness on domestic violence and strict enforcement of law and Acts related to domestic violence. She also suggested the need to study the relationship of domestic violence with various risk factors by logistic regression and also the need to conduct a larger study, which would be funded by the WHO. The team informed that it has been done. 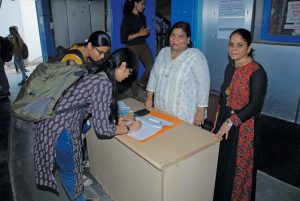 Dr. Kajok Engtipi, Senior Resident, Dept. of Community Medicine, Maulana Azad Medical College presented the findings on the knowledge and attitude of the study subjects regarding domestic violence. The key findings mentioned were that majority of the women in the study were aware that domestic violence is very common in Indian households, 42% women agreed that husbands have a right over their body and very few felt that they should be the ones taking financial decisions at home. Also 45% of women were unaware about the Act against domestic violence, calling for the need for sensitization of women.
Dr. Suneela Garg presented the key findings and way forward for the study. During her presentation she spoke about the overall burden of domestic violence amongst pregnant women in this study and the association of domestic violence with various risk factors, which were found to exist from this study. In the way forward for this study, Dr. Suneela Garg spoke about the need for screening of all women for domestic violence (with special focus on pregnant women) through grass root level workers, pre-marital and marital counseling, sensitization of women, community members, PRI, policy makers as well as health care personnel and also stressed on the involvement of male partners. Lastly, the challenges faced in the elimination of domestic violence and ways to overcome these challenges were discussed in this session. The workshop ended with the felicitation of all the guests and a vote of thanks by Dr. Nandini Sharma, Director Professor, Dept. of Community Medicine, Maulana Azad Medical College 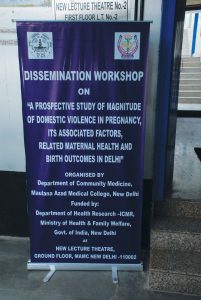